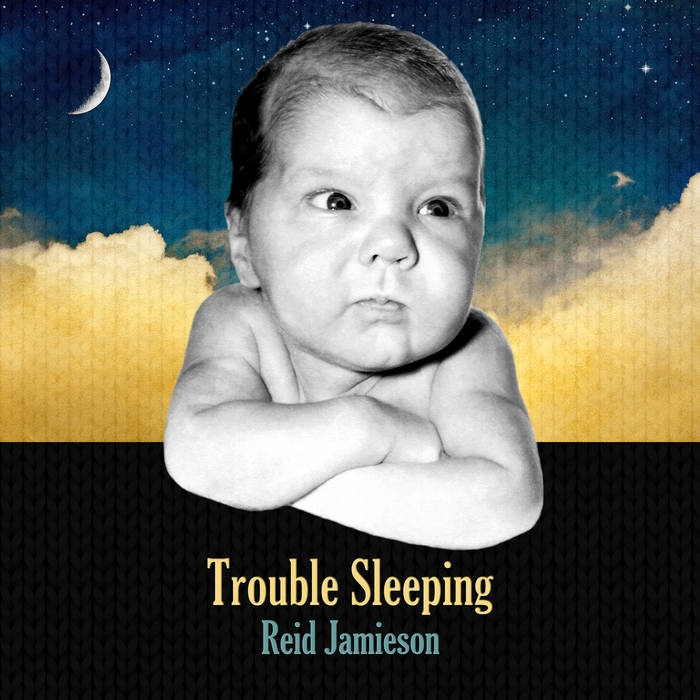 If you are anything like us, then you have had some Trouble Sleeping lately. Maybe all your days even. Whether you are a wee baby, a hormonal woman, an anxious human fretting about your choices, or just overwhelmed with world events…you might need a little help with finding dreamland. Reid Jamieson’s new collection of all ages lullabies might be just the natural sleep aid you seek. Nylon string guitar. ukulele and Reid’s signature croon made to melt hearts. With tender tunes by Willie Nelson, Buffy Sainte-Marie, Yoko Ono, Cliff Eberheart, a couple of old chestnuts, a new original lovers lullaby, and an instant classic written by Reido’s own pappy back in 1976. Guaranteed to put you to sleep – or your money back!


1. Catch A Falling Star – Paul Vance / Lee Pockriss
We felt this old Perry Como classic is the perfect start to your journey to dreamland. This one is for Raney and Maxine.

2. Pappy’s Lullaby – Gilbert Harvey Jamieson
Reido’s dad used to sing this one to him back when he was just a wee thang. Imagine our surprise when pappy told us he actually wrote the song just for Reido back in 1976! An instant classic in the style of Glen Campbell.

3. My Curly Headed Baby – George H. Clutsam
Recorded this initially for our dear pal Merrill Bevan, he was introduced to the tune by his father who was a huge fan of Paul Robeson and his version. Robeson (Apr 9, 1898 – Jan 23, 1976) was an American bass baritone concert artist, stage and film actor, athlete, and activist who became famous both for his cultural accomplishments and for his political stances. Check out his version here

4. Remember Love – Yoko Ono
Initially released as the b-side of John Lennon and Ono’s 1969 single “Give Peace a Chance”, the label to the single states that the song was recorded in England, but it was actually recorded in Room 1742 of the Queen Elizabeth Hotel in Montreal. Long live Yoko Ono.

5. Hey Little Rockabye – Buffy Sainte-Marie
Written by one of the humans we admire most in the world, Buffy created a lullaby for rescue animals and we dare you to make it through this tune without weeping into your pup’s little fur coat. This one is for Mumsy.

6. Goodnight – Cliff Eberhardt
We came upon this song while researching tunes for our Buffy Sainte-Marie tribute. It was the only song we chose that she didn’t write herself, so we put it here instead. She states on her website that is is her favourite song (Cliff himself said she made it so completely her own, the first time someone ever covered him ). Seldom have we been so perfectly charmed by a cover. This one is for Buffy.

7. I Guess I’ve Come To Live Here In Your Eyes – Willie Nelson
As long as we have been together Reido has been singing this song, and it feels like home. From the soundtrack for the 1980 film Honeysuckle Rose starring Willie himself. A huge influence that needed to be included here.

8. May You Never – Reid Jamieson & Carolyn Mill
A little lovers’ lullaby we wrote quite a while back now. A tender pledge to care for each other, wherever we may be, but hopefully side by each, forever. Crooning and writing together 20 years in 2022.

9. Little Pink Pony – Brenda (nee Bridge) Jamieson
Just a wee something Reido’s late mom used to sing to him, her riff on an old tradional.

10. Foundling’s Lullaby – Reid Jamieson
An alternate take on Lullaby for the Lost from Me Daza. For all our adopted friends and family, you are our chosen ones.

Recorded and performed by Reid Jamieson at Juniper’s Nest in Metchosin and Juniper’s Boudoir in Vancouver BC. Produced by Carolyn Victoria Mill. Mastered by Michael Holland. Artwork CVM. Dedicated to Gayle ‘Ladybabe’ McKool.